Today the Weed City Council approved an agreement which secures, in perpetuity, the City’s rights to the high quality Beaughan Springs water upon which our community has relied for more than 110 years.

This is a tremendous win for our community and the citizens who have struggled since 2016 against Roseburg Forest Products’ (RFP) efforts to take away our most important water source. Facing ongoing public pressure and negative publicity for its role in Roseburg’s “water grab,” Crystal Geyser Roxane (CG Roxane) has agreed to purchase the water rights from RFP and then transfer them to the City on highly favorable terms, terms now approved by the City. CG Roxane is also taking a number of other steps to improve its relationship with Weed, where it operates a large water bottling plant.

“This is an historic victory for everything we have been fighting for. We always said we would not rest until Weed was recognized as the rightful owner of the full 2.0 cfs of water from Beaughan Springs. And now we will be. We would like to express our thanks to the Weed City Council, our City Manager Tim Rundell and CG Roxane for coming to this historic agreement, as well as to the citizens of Weed who have long supported our efforts.”
–Jim Taylor, WCWC President

Background
The conflict arose as the pure spring water long used by communities around Mount Shasta became sought after as a valuable commodity by the international water bottling industry. Roseburg Forest Products (RFP) manipulated a lack of clarity over Weed’s rights to 2.0 cubic feet per second (cfs) of water from Beaughan Springs, from the days when we were a company-owned town, in order to pursue its own claim to the water. In 2016 RFP pressured the Weed City Council into agreeing to a water lease agreement that reduced the City’s use of Beaughan Springs, charged almost $100,000 per year for the remaining water, and would have phased out the City’s use of the springs entirely by 2026.

Water for Citizens of Weed, CA (WCWC) was formed by concerned residents, including three former mayors, respected town elders and others, to resist this threat to our community’s water. Throughout the last five years WCWC kept the pressure up on RFP–distributing newsletters and flyers, conducting town forums, filing complaints with State agencies and the Forestry Stewardship Council, and organizing a protest at RFP’s company headquarters in Springfield, Oregon. This resulted in extensive publicity, including regional and national newspaper articles and two documentary films.

After WCWC uncovered evidence showing that International Paper, the previous owner of the RFP mill, had intended to transfer the disputed water right to the City, the Weed City Council joined WCWC in a complaint to State agencies requesting an investigation. In response, RFP immediately initiated legal action—against the City of Weed, WCWC and nine individuals. Naming WCWC and the “Weed 9” in the lawsuit was an intimidation tactic, known as a “SLAPP” (strategic lawsuit against public participation) meant to silence our opposition to RFP’s water grab. RFP appealed a December 2017 court ruling that this was indeed a SLAPP and dragged its ultimately unsuccessful effort out for three full years, eventually dropping the suit and having to reimburse WCWC for all our legal costs.

In the face of RFP’s seemingly unlimited legal resources, the City was eventually forced to concede the water right without ever having its day in court. The City then initiated an eminent domain process
which, while it may have ultimately been successful, would likely have been a long and expensive process. This new agreement, while not cost-free to the City, avoids the uncertainty and expense of such a process and secures the water for our community forever.

Crystal Geyser Roxane’s Role
Much evidence, including a revealing October, 2016 New York Times article that quoted the company’s founder, pointed to CG Roxane, looking to expand its water bottling operations, as the force behind Roseburg’s move to profit off of Weed’s water. As a result, CG Roxane became a secondary focus in the campaign to save Weed’s water. Last year CG Roxane was forced to withdraw a proposal for a problematic waste water leach field after WCWC-led community opposition and petitions to State agencies. Given the probable eventual success of the City of Weed’s eminent domain lawsuit, continuing to be seen as complicit in–and a beneficiary of–Roseburg’s unethical water grab appears to have become untenable for CG Roxane, leading to this new initiative to help Weed secure our water.

“While not quite in the way we originally expected, this is an undeniable win for our community. There was a very strong case for this water belonging to our community all along. But, in the face of Roseburg’s legal bullying, the City was forced to concede ownership. We appreciate CG Roxane finally recognizing the City’s longstanding right to this water and cooperating in making this happen. We need to keep in mind, however, that CG Roxane only came to the table because of sustained community pressure. And that this agreement is not a ‘free pass’ for the company to do whatever it wants in our community in the future.”
–Bruce Shoemaker, WCWC member

On August 11, Water for Citizens of Weed, California (WCWC) issued a press release announcing that the City of Weed ended

The 'Weed 9' Rallies Against Corporate Water Grab and Legal Bullying

SPRINGFIELD, OREGON – Residents of Weed, California are rallying today outside the headquarters of Roseburg Forest Products to demand that

The ‘Weed 9’ Rally Against Corporate Water Grab and Legal Bullying

Are you in the Pacific Northwest? On December 18, join this event in Springfield, Oregon to protest against a SLAPP brought by 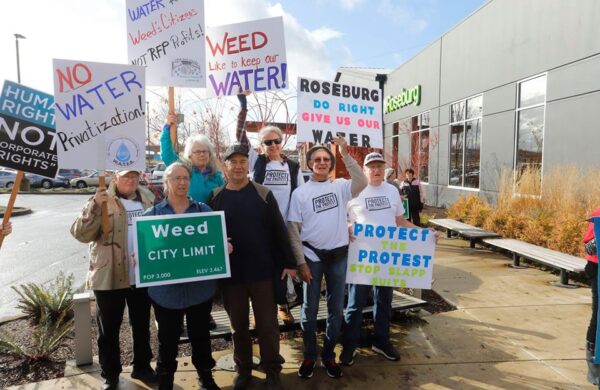 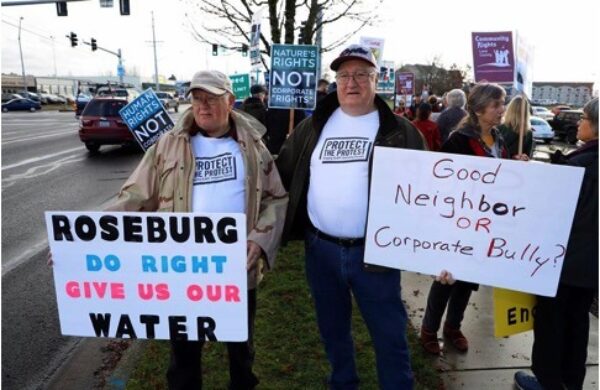 SLAPPed for protecting his community’s water source Jim Taylor, is the President of Water for Citizens of Weed, CA (WCWC). For over